Review & Excerpt: Lightning In A Mirror by Jayne Ann Krentz 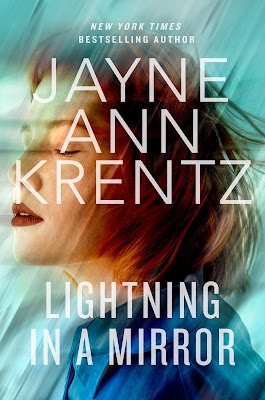 New York Times bestselling romantic thriller writer Jayne Ann Krentz returns this fall with the explosive final installment of her chilling Fogg Lake trilogy. Whispers of the elusive Vortex lab have erupted the paranormal underground into chaos, and it is up to psychics Olivia LeClair and Harlan Rancourt to find it before its immense power falls into the wrong hands in LIGHTNING IN A MIRROR.

Private Investigator Olivia LeClair wasn’t sure what to expect when she signed up for the Four Event Success Guaranteed speed dating package, but a run-in with a serial killer certainly wasn’t on the list. Thinking it couldn’t get much stranger than that, Olivia decides to give it another shot. Of course, when you’re a powerful aura reader from a mysterious town buried under government conspiracies, strange doesn’t even begin to cover it.

So, when Harlan Rancourt, a man long thought to be dead, shows up at the next round of speed dating, she takes it in stride. After years on the run from the Foundation, a shadowy organization that both protects and polices psychics, Harlan is sure he’s finally found a lead on the mysterious Vortex, which played a role in permanently altering the DNA of every resident in Fogg Lake. He’s convinced that Olivia, a direct descendent of powerful oracles in Fogg Lake, is the only one who can help him locate the lab.

Olivia isn’t convinced. She’s not an oracle, and though she has powerful psychic energy, so do plenty of others. She doesn’t even know if she can trust Harlan. Though he looks perfectly “average” on the surface, Olivia immediately sensed he was far more powerful than the Foundation knew—and there was a very real possibility that he only resurfaced to claim leadership of the Foundation for himself. But when Harlan tells Olivia that Vortex may be the key to uncovering her mother’s killer, she has no choice but to follow him into the depths of danger and secrecy before those hunting the lab—and the oracle at its center—catch up to them.

This final book in the Fogg Lake trilogy ties up the series and moves forward the world building in Krentz's many interconnected books about paranormal powers, the Arcane Society. Though you can read this as a stand alone, it helps if you have at least read some of the related books even if not books one and two in this trilogy.
Olivia LeClair is a paranormal private investigator. She's originally from the small mountain town of Fogg Lake and her adventurers in this book bring her back home. But not before she meets Harlan Rancourt, who may or may not be an enemy but is definitely not the ideal guy she's looking for, despite how they meet.
Mixing conspiracies, adventure, mysteries, suspense, romance, and witty banter, with a twisty, engaging story. I didn't always trust Harlan but that was due in large part to how his character was introduced. I also got frustrated at times with Olivia's stubborn resistance to the true nature of her psychic skills. That didn't stop me from enjoying the story and finishing it in just a day. I am always amazed at the different psychic abilities that Krentz comes up with; there seems to be no end to her imagination. I enjoyed "Lightning In A Mirror" and am looking forward to more Arcane Society books.

“If I disappeared tomorrow would you walk into hell to find me?” Olivia asked.
She did not look up from her phone. She wasn’t supposed to be on it. The rules of the speed dating event were quite specific about that. All phones, watches and assorted tech were to be powered down for the evening. But she had concluded the event was a waste of time, so she had palmed her phone from her handbag. She was now holding it under the edge of the cocktail table, where the event coordinator could not see it.
The knee-length burnt orange wool coat she was examining was stunning, but, sadly, the color was over-the-top for Seattle. Most of the outerwear on the city’s streets came in shades of gray, black, navy and forest green. If she were to stroll down Pine Street in a burnt orange coat, she might as well carry a sign that shouted tourist.
The man who had just sat down on the other side of the small, round table did not respond to the question. With a sigh, she looked up. It was obvious from his uncertain expression that he thought she was texting.
“I said, if I disappeared tomorrow would you walk into hell to find me?” she said.
“Excuse me?” He looked around and then leaned forward. He lowered his voice. “I think they said that we should turn off our phones.”
“Sorry.” She dropped the phone into her large handbag, wedging it between her turmeric-yellow wallet and the vintage camera. She took a closer look at her new date. The name tag stuck on his shirt identified him as Nathan.
“Hi, Nathan. I’m Olivia,” she said, going for bright and sparkly. “I’ll repeat my question. If I disappeared tomorrow would you walk into hell to find me?”
“Uh.” Nathan got a deer-in-the-headlights look.
She recognized the expression. Nathan was rapidly coming to the conclusion that she was weird. Within the next thirty seconds he would do what the previous dates had done—excuse himself and take off to find the restroom, where he would hide out until the bell rang.
It was not Nathan’s fault she had signed up for the Four Event Success Guaranteed package offered by the speed dating agency. So far most of the people she had met had been nice. A bit boring—but nice. The experiment had been a disaster for her, however.
She had purchased the package because it was 20 percent off. The first event had been a washout, but she had told herself to be optimistic. You couldn’t expect immediate success. But now she was midway through the second event and the prospects were looking even more dismal.
“I’m not sure exactly what you mean,” Nathan said.
He did a quick, furtive glance around the room. It didn’t take any psychic talent to know he was searching for the restrooms.
She gave him another shiny smile. “The matchmaker said we are supposed to ask each other questions. That’s my question.”
“Oh.” Nathan cleared his throat. “Well, uh, I guess it would, you know, depend.”
At least Nathan was considering his answer, not running for the restroom. That was promising.
“What would it depend on?” she asked.
“How well I knew you. Whether or not you and I were, you know, close.”
“And if we were close?” she pressed. “Then would you walk into hell to find me?”
Panic sparked in Nathan’s eyes. He glanced at the table where the event coordinator sat. When he realized there was no salvation coming from that direction, he made a heroic effort to move forward.
“My turn,” he said, bubbling with artificial enthusiasm. “My question is, where do you like to go on vacation?”
“Hawaii. My turn. If I went missing would you walk into—”
“I guess I’d call your friends first,” Nathan said. He sat back in the booth, putting a little more distance between them. “See if they knew where you were. Then, uh, maybe call the cops. Hey, I like Hawaii, too. Do you snorkel?”
“No.” She leaned forward, closing the space he had just made. “How hard would you look for me?”
“Well, uh, I’m not an expert when it comes to search and rescue work. Don’t you need a dog for that?” Nathan shot to his feet. “Excuse me. Gotta hit the restroom. Be right back.”
And another one bites the dust. No, that wasn’t right, Olivia thought. I’m the one who just bit the dust. Again. She realized she didn’t care. The speed dating experiment was a failure. If she hadn’t bought the Four Event Success Guaranteed package she would leave right now. But she had made an investment, and the fine print was firm—no refunds.
From LIGHTNING IN A MIRROR published by arrangement with Berkley, an imprint of Penguin Random House LLC. Copyright © 2021 by Jayne Ann Krentz.
About Jayne Ann Krentz ~
With over 40 million novels sold, Jayne Ann Krentz is one of the most commercially successful authors writing today. While she is a household name for her romantic thrillers, many of her more than fifty New York Times bestselling novels were historical and futuristic romance, written under the pseudonyms Amanda Quick and Jayne Castle, respectively. Krentz lives in Seattle, Washington. Learn more online at jayneannkrentz.com.