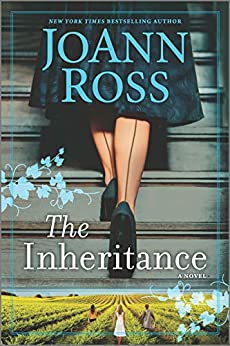 When conflict photographer Jackson Swann dies, he leaves behind a conflict of his own making when his three daughters, each born to a different mother, discover that they’re now responsible for the family’s Oregon vineyard—and for a family they didn’t ask for.

After a successful career as a child TV star, Tess is, for the first time in her life, suffering from a serious identity crisis, and renewed resentment around losing her father all over again.

Charlotte, brought up to be a proper Southern wife, gave up her own career to support her husband's political ambitions. On the worst day of her life, she discovers her beloved father has died, she has two sisters she never knew about, and her husband has fallen in love with another woman.

Natalie, daughter of Jack’s longtime mistress, has always known about her half sisters. And she can’t help feeling that when Tess and Charlotte find out, they’ll resent her for being the daughter their father kept.

As the sisters reluctantly gather at the Maison de Madeleine to deal with their father's final wishes, they become enchanted by the legacy they've inherited, and by their grandmother’s rich stories of life in WWII France and the wounded American soldier who would ultimately influence all their lives.

"The Inheritance" is an emotional story of love, failure, courage, starting over, family, friendship, and forgiveness.
It starts off slowly and builds up to the emotional pay-off. This is a character driven story, with little external conflict. But oh, there's plenty of internal conflict. An absent father, unknown relatives, major life changes, even a love story - Ross slowly spins a story that lures you in. At heart, the story is about change. Life is ever-changing and change can be good, bad, or both simultaneously. It's how we handle it that matters.
Tess, Charlotte, and Natalie are all engaging women who are struggling with the upheavals to their lives. It's a shock finding out you have siblings, and then to be expected to spend time together, work together and live together. Their struggles were relatable as they dealt with existing problems in their lives, newfound sisters, a grandmother, career changes, and love interests. I was surprised to find that I wanted more of the story to be set in WWII. I'm not usually a fan is historical stories, with some exceptions, but I enjoyed the snippets of the story set during the war. The epilogue was, not to my liking. I can't say too much or I'll reveal spoilers but it was sappier than I personally like. Other readers may love it.
"The Inheritance" was sweet, weepy, and engaging. If family drama is your jam, pick up "The Inheritance".
Check out an excerpt from "The Inheritance" and read a post by Ms. Ross on her inspiration for the story.
Bea at 1:00 AM
Share