Meet Author Jeffrey James Higgins and Enter to Win a Copy of His Debut Novel, Furious: Sailing Into Terror

Today it's my pleasure to have an old schoolmate on the blog, Jeffrey James Higgins. We went to high school together and are Facebook friends. He's the, third, I think, of our graduating class to be a published author. Jeff, did I miss someone? You, John Hunt, and Maggie Smith? Plus Tim Baer, who graduated a few years before us.

Jeffrey James Higgins is a former reporter and retired supervisory special agent who writes thriller novels, short stories, creative nonfiction, and essays. He made the first narco-terrorism arrest, convicted the world’s most prolific heroin trafficker, and convicted an Iranian spy. He has wrestled a suicide bomber, fought the Taliban in combat, and chased terrorists across five continents. Jeffrey has appeared on CNN Newsroom, Investigation Discovery, CNN Declassified, New York Times, and Fox News. He was a finalist Adelaide’s 2018 Best Essay Contest and a quarterfinalist in ScreenCraft's 2019 Most Cinematic Book Competition and 2021 Cinematic Short Story Writing Competition.
Find Jeffrey online: 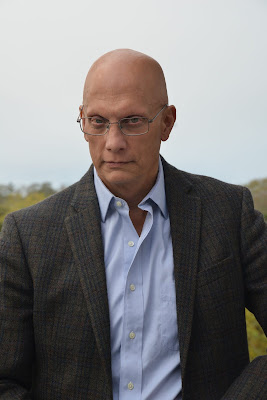 My wife is my hero and my inspiration.

In my debut novel, Furious: Sailing into Terror, Dr. Dagny Steele grieves the unexpected loss of her child, and her despair threatens both her career and her desire to live. Dagny’s husband tries to snap her out of her depression by dragging her onto a 62-foot yacht for a sailing voyage across the Indian Ocean. Alone with her husband and surrounded by hundreds of miles of water, Dagny begins to recover, but the ocean can be perilous. They encounter a raging monsoon, a great white shark, and other deadly threats, but sometimes, the greatest danger is what you don’t see.

The themes running through Furious are courage in the face of adversity, fighting to survive, and never giving up. My wife, Cynthia Farahat Higgins, inspired those themes. I’m fortunate to be married to the person I most admire, and that relationship has informed all my writing.

Cynthia is Egyptian, and in the early twentieth century, Egypt enjoyed free markets and personal freedom and became an economic powerhouse that drew labor and tourists from across the globe. Pictures of Cairo’s streets from that era are indistinguishable from Paris. But that was not the country in which Cynthia grew up.

Cynthia’s country became a strict Islamic, patriarchal society dominated by Sharia law and socialism. Her school taught her how to mutilate infidels and outside her home, she was under constant threat of beatings or rape. Women can’t call the police in Islamic countries for fear of being victimized by them. Life for women in the Middle East is a challenge.
Cynthia was a talented sculptor, poet, and writer, and despite sculpture being discouraged in Egyptian society, she created beautiful busts from construction clay, often cutting her fingers on the rough material. She asked to go to art school, but the Egyptian government assigns fields of study and refused her request. For a girl living in a totalitarian society, being denied her dream was the final straw, so she did what heroes have always done—she fought back.

She needed to understand her enemies and discover what drove the Islamist mind, so she barricaded herself in her room and studied Islamic history and law, reading enough to become a Mufti. She also studied philosophy and politics and longed for the freedoms provided by the American Constitution. Cynthia became a founding member of the first secular, pro-Western opposition political party in Egypt, and pushed her country toward classical liberalism.

For a decade, Cynthia was under constant government surveillance. Government agents bugged her apartment and would call and play her recordings of her private conversations. They followed her through the streets and sent agents to infiltrate her party. Islamists from al-Qaeda and the Muslim

Brotherhood routinely threatened to rape, murder, and decapitate her, calling dozens of times at night—every night. But Cynthia did not yield, and she continued to spread ideas of freedom, equality, and tolerance. She became a threat.

During the Arab Spring, the Egyptian government kidnapped and tortured Cynthia’s brother. The minister of the interior demanded she negotiate with the government on behalf of the protesters to win his release—but she refused and never wavered. Then the government murdered Cynthia’s friend and said they planned to assassinate her next. Cynthia had no choice but to flee, and she sought asylum in the US.
Cynthia continued to write from her new home in Washington, DC, exposing Muslim Brotherhood infiltration and promoting freedom of speech, freedom of religion, and individual liberty. The government had banned her name from print in Egypt, but now her articles appear on the front pages of Egypt’s newspapers. A ranking member of the Muslim Brotherhood called her the worst thing to happen to that terrorist organization in America. Cynthia—a woman battling multiple sclerosis, cancer, Islamism, socialism, patriarchy, and violence—has terrified a terrorist organization by writing articles in her bathrobe and bunny slippers.

Cynthia has changed the course of history in Egypt and has risked her life to fight for American ideals. That’s why she is my hero.Cynthia’s expertise in radical Islam also inspired my second novel, Unseen: Evil Lurks Among Us, which Black Rose Writing will publish on August 26, 2021. I have been fortunate to know someone like Cynthia, and I often infuse my characters with her virtues. I hope you enjoy reading Furious and Unseen.
*************** 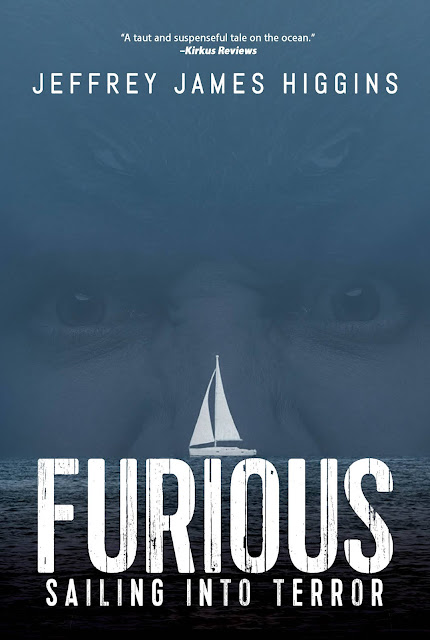 Trapped on a storm-damaged yacht, a grieving woman must conquer her worst fears and fight for her life, in a story described as The Shining on a yacht. Dr. Dagny Steele is on the verge of fulfilling her lifelong calling to become a pediatric surgeon when the sudden death of her daughter sends her into a crushing depression. Grief stricken and desperate to heal, she takes a leave of absence and sails across the Indian Ocean with her husband. Dagny begins to recover from her tragic loss when her voyage turns into a nightmare. Isolated and hunted at sea, can she survive a deadly crucible?

Jeffrey is giving away two copies of his book, one paperback and one hardcover. Both will be signed.
The rules:
US only, due to shipping. Sorry!
You can enter either or both giveaways but each will have a separate winner. If you win, you will need to provide a mailing address so that Jeffrey can send you your prize.
You must be 18 or over to enter. Please read my Giveaway policy and my Privacy policy.
Enter to win a signed hardcover copy.
a Rafflecopter giveaway
Enter to win a signed paperback copy.
a Rafflecopter giveaway
Bea at 12:00 AM
Share