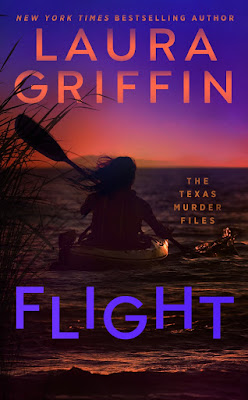 When former forensic photographer Miranda Rhoads moves to the seaside town of Lost Beach, she's decided to make her living as a wildlife photographer and put crime scenes behind her. But her plans are quickly upended when one morning, she comes across a couple sleeping in a canoe, entwined in an embrace. Looking closer, she realizes the man and woman aren't asleep – they've been murdered.

Detective Joel Breda sets out to find answers – not only about the unidentified victims in the marshy death scene, but also about the aloof and beautiful photographer who seems to know more about his investigation than he does.

As they begin to unravel the motivation of a merciless serial killer, Miranda and Joel must race against the clock to make an arrest before the killer can find them first.

First off, a disclaimer: I read the bulk of this book while recovering from an injury where I was on a pain killer and muscle relaxer. It didn't make me loopy but it did mess with my focus. I had a hard time focusing on anything. It took me three times as long to read this book as it normally would. I've no doubt all of that affected my thoughts and feelings. I will need to read it again, when I'm not in pain or on painkillers.
Okay, the story. :)
The lead female, Miranda, is the sister to the lead female Bailey, in the first book in this series but you do not need to have read that one. This is a stand alone and not really connected to the first book. Miranda is taking time off from CSI work after a disastrous case, and allowing herself time on her hobby of nature photography. She is intense, dedicated, and a workaholic. So is Joel, the male lead. When a dual murder occurs at the start of tourist season, Joel and the rest of the police department feel the pressure to get it solved, quickly. Miranda gets involved because A) she found the bodies, and B) she's a former CSI who is conveniently available to fill their conveniently open CSI position. They work together with the rest of the police department, looking for clues and motives. The mystery was intriguing and I felt stupid for not figuring out who the villain was. I was stumped. It made sense though and there were clues sprinkled throughout. The motivation too was intriguing and gave me something to think about when my brain clears.
One thing I liked was that rather than waiting until late in the book to get the romance started, Griffin brings them together earlier on. The books of hers I've read, though marketed as romantic suspense, tend to be heavy on the mystery and light on the romance. In "Flight", the romance was better developed and more central to the story, though the emphasis is still on the mystery. I did feel the HEA was too fast, an HFN seemed more appropriate, but I had no trouble believing they would be together.
I found the book easy to put down, but that may have been my lack of focus and not the story. While I enjoyed it, it wasn't compelling enough to break through my brain fog. Take that as you will. I will be back for book three. :)
Thank you Berkley Romance for the review copy, and for the excerpt below!

She went to the sink and stood for a moment to get her bearings. She splashed water on her face, then grabbed a dishtowel and blotted her cheeks.

She pictured Officer McDeere beside his patrol car talking on his radio. Then she pictured the detective. Joel Breda. She thought of his wide shoulders and narrow hips, and the stern look in his blue eyes as he’d towered over her.

You could tell they were dead?

Miranda shuddered and squeezed her eyes shut, wishing she could get the images out of her head. But of course, she couldn’t. The lifeless bodies were seared into her memory. She was a visual person, which had propelled her career, but sometimes it felt like a curse.

She tossed the dish towel away and opened the refrigerator. Usually, after a sunrise photoshoot she brewed a pot of strong coffee and sat down to pore through her results. But she was wired to the point of being dizzy, and the last thing she needed was caffeine. She had a sudden craving for a cigarette, which made no sense because she hadn’t smoked since college.

She reached for a bottle of water and took a long swig. Then she grabbed a beach towel off the stacking washer-dryer in the corner of the kitchen. The towel was gritty from her last trip to the beach with Benji, but she wrapped it around her shoulders and went to her workspace.

The corner of the living room was her office, and her laptop perched on a rickety wooden card table that she’d found in the bedroom closet with a stack of jigsaw puzzles. She brought the computer to life and plugged in her camera, then sat down. She checked the clock: 8:28. She didn’t have much time, but this couldn’t wait until after work.

Benji nudged her knee with his nose.

He grunted and licked her hand, and she knew he sensed her agitation. He always keyed in on her moods.

Miranda clicked into the photo software and watched her shots roll in. Thumbnail images flashed at warp speed—a sunset at the nature center, last weekend’s regatta, a series of sand dunes.

It had been far too long since she’d uploaded her memory card, and now today of all days, she’d reached capacity.

Miranda scooted her chair in and watched the screen as her stomach filled with dread. Shuddering again, she pulled the towel tighter around her shoulders. Why was she so rattled? She’d seen bodies before. But that was different. Different place, different context.

She clicked an image to enlarge it. The great blue heron. The shot was good. Exceptional, even. She scrolled past it until she reached the clump of cattails.

Start big and get small.

Her photography instructor’s voice echoed through her head again. That was exactly what she’d done. Even in her panic, she’d fallen back on her training.

She had several shots of the cattails with the green canoe camouflaged among the reeds. She scrolled through the images, getting closer and closer until she came to the overview shot.

Miranda’s chest tightened. The scene took her breath away, even now, separated from the horror of it by time and space.

She combed through her photographs, studying the legs, the faces, the hands.

Miranda bit her lip. She pulled the towel tighter. She scrolled and scrolled until there it was—the shot she’d been looking for.

Early this morning, she’d been totally hands-off, but now she could really look. She touched the screen and spread her thumb and forefinger apart to zoom in.

Miranda’s pulse picked up. She leaned closer. She hadn’t been seeing things or imagining. It was just as she’d thought.