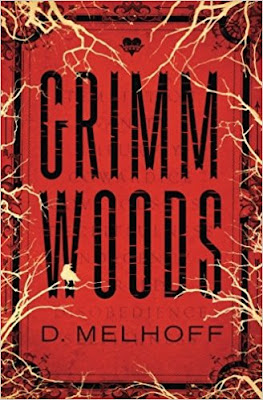 
A REMOTE SUMMER CAMP becomes a lurid crime scene when the bodies of two teenagers are found in a bloody, real-life rendering of a classic Grimm's fairy tale. Trapped in the wilderness, the remaining counselors must follow a trail of dark children's fables in order to outwit a psychopath and save the dwindling survivors before falling prey to their own gruesome endings.

Drawing on the grisly, uncensored details of history’s most famous fairy tales, Grimm Woods is a heart-pounding thriller about a deranged killer who uses traditional children’s stories as tropes in elaborate murders. Set against the backdrop of modern-day Michigan, it’s a journey through the mind of a dangerous zealot and a shocking glimpse into the bedtime stories you thought you knew.

When I was a kid, I came across a book of Grimm’s Fairy Tales. The tales in this book were not like anything I had read previously. They were dark and twisted and I loved them. It was a couple years later that I discovered that the original Grimm’s tales were not the fun-filled happy-ever-after tales that Disney instilled in us. They were dark, even darker than that book I had gotten my hands on.

When this book was offered, it really got my interest because of the dark twist of fairy tales that it offered. I was not disappointed at all. I find most horror books a good read and if I get some chills, then it is a great one. This book absolutely terrified me. I read it in one go. I loved it!

When you think of summer camp, you think of wholesome counselors who are peppy and fun. What sets this camp apart right from the beginning is that the counselors are not what you would expect. Strippers and drug addicts make up some of the staff. (Definitely NOT a camp my son would attend) However, they are what is needed by the killer to make his point and teach his lessons. The original Grimm’s tales taught lessons in gory and twisted ways, as does our killer. I became anxious wondering which fate from which tale would hit each person. It does take a bit before the fairy tale theme becomes evident but you will not be disappointed.

I loved this book and I am going to have to see if this author has more books out there. I hate teen slasher films but I really got into this book and if it is ever made into a movie, I will go see it and probably sit there with my hands over my eyes the whole time.

July 7th, 5:44 a.m.
One hacksaw. One hammer, six boxes of nails. Twelve Mason jars, four hunting knives, two pairs of handcuffs. Fifteen gallons of gasoline divided evenly among three dented jerry cans.
It’s time.
A work glove hovered over the table where the objects were laid out side by side and began ticking the air as though marking off an invisible checklist. The chamber reeked of mildew, and the walls had no windows or electrical sockets—no lamps, no wires, no switch covers. A single red candle provided the only light, its crimson wax dripping down its shaft like blood.
The hand picked up a piece of paper from the table and slipped it into a blank envelope. Below, a beetle scuttled across the floorboards. The insect—its gangly antennae tuned to some foul frequency in the gloom—raced past the sole of a giant boot just as a drop of liquid fell through the air and struck it dead center, engulfing its body in a hot, gelatinous blob that filled its orifices and burned it from the inside out. Another droplet tumbled from the candle, plopping onto the envelope this time, and then a brass stamp came down and pressed the wax into a hardened seal.
Drawing in heavier, raspier breaths, the figure held the envelope up to a corkboard that was bolted to the wall. More than a dozen pictures of young men and women were tacked to the panel by their throats and foreheads, smiling in the shadows.
The figure pinned the envelope to the board and stepped back to take in the room again.
The table and the switchblade.
The book of matches.
The iron rods, the hatchet, the .22 Smith & Wesson.
The smiling faces.
Now, the figure mused, watching the photographs flicker in the bloodred light. Who’s the nicest, Who’s the worst, who wants to hear a story first?

D. Melhoff was born in a prairie ghost town that few people have heard of and even fewer have visited. While most of his stories are for adults, he also enjoys terrifying younger audiences from time to time, as seen in his series of twisted picture books for children. He credits King, Poe, Hitchcock, Harris, Stoker, and his second-grade school teacher, Mrs. Lake, for turning him to horror.

Stop by all of the blogs that are hosting Grimm Woods by D. Melhoff for great features, reviews, & giveaways!

Thanks for taking the time to comment. I enjoy hearing from my readers. Let's talk!