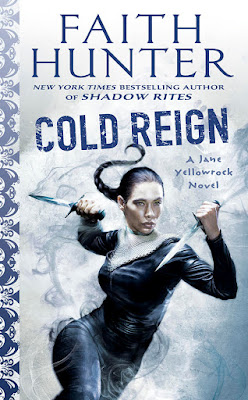 
Jane Yellowrock is a shape-shifting skinwalker…and the woman rogue vampires fear most.

Jane walks softly and carries a big stake to keep the peace in New Orleans, all part of her job as official Enforcer to Leo Pellissier, Master of the City. But Leo's reign is being threatened by a visit from a delegation of ancient European vampires seeking to expand their dominions.

And there’s another danger to the city. When she hears reports of revenant vampires, loose in NOLA and out for blood, Jane goes to put them down—and discovers there’s something unusual about these revenants. They never should have risen.

Jane must test her strength against a deadly, unnatural magic beyond human understanding, and a ruthless cadre of near-immortals whose thirst for power knows no bounds…

Wow, the book started with a bang and hardly stopped. Events happened quickly and there was a lot going on. Hunter pulled and brought together numerous threads and plot lines from earlier books. If you are new to the series, STOP, do not pass go, but grab book 1 and read in order. You can not jump into the middle of this series.

There was a scene with Alex and some vamps where my heart almost stopped and I was having very unkind thoughts about Ms. Hunter. Throughout the story, she put me through the wringer but overall I was happy with the book. I loved the blend of vamp politics, relationships, action, suspense, world building, even romance, and religion. There are revelations galore and I decided that I really need to go back and read the earlier books again, especially in light of the revelations. Also, my feelings on some characters, including Jane herself, have changed over the series. Hunter does not keep her characters, or her world, static but lets them grow and change. It's one of the strengths of the series.

"Cold Reign" kept me reading, flipping the pages on my ereader to see what would happen. It kept me guessing, made my heart race, and gave me all the feels. It's a smart, thrilling, complicated story that is exactly what urban fantasy should be.

Any Faith Hunter book is a no-brainer for me to pick up ever since I read the first one way back when. I love this series. I read this book in a couple of hours in just one sitting. I could barely keep my eyes open at work the next day but it was totally worth it.

It starts out with a bang and just doesn't let up. I couldn't put it down, even if it meant only two hours of sleep. You have all the vamp action with Jane killing ancient revenants, weird magic, NOLA storms and the European vamps heading into town causing chaos. Plus there is the added bonus of seeing Jane's different relationships evolve. I really liked her interactions with Bruiser. He came home and cooked for her. Yes he is that kind of guy and to think that I did not like Bruiser in the beginning of the series.

There were a couple of LOL moments that I enjoyed immensely. One was an scene with Alex and Brute. I was giggling so much, Liam (my 6 year old) came into the room to see what was so funny. It definitely lightened up the pages right before it. Another was a quick mention of NCIS-NOLA, pertaining to the death of sailors. I watch NCIS religiously so I had this mental view of SSA Dwayne Pride and Agent Chris LaSalle investigating a vampire kill. It made me giggle.

Overall, you will not be disappointed. Faith Hunter has struck another home run with Cold Reign and it will find its permanent home next to the others on my bookshelf.

Taking down the old rogue wasn’t technically part of my job as the Enforcer of the MOC, but as the nation’s foremost expert on rogue vamps—vampires who went nutso and started killing their dinners—I had agreed to go, at speed. The younger Younger, my other business partner, was still negotiating my contract for the hunt, and though I’d never have told Alex this, I’d have done the job for free. Suck-heads who kill humans go down. Period. Suckheads who kill kids, like the kid sailor, go down with extreme prejudice.


“Leo will be pissed,” Eli said, about me killing the rogue.

I showed teeth. It wasn’t exactly a smile. Leo had wanted the vamp alive, to question, claiming his own blood was strong enough to bring the rev’s brain back online. Leo wanted a lot of stuff and it was my greatest—okay, second-greatest—pleasure in life to frustrate him.

From the site where the sailors’ bodies had been found, I’d tracked the rogue through neighborhoods to his daytime lair, and from there to the Belle Chasse high school. This guy had been a killer, pedophile, and Naturaleza blood-sucker in his vampire life, and so I hadn’t given him a chance despite Leo’s demands. The six chest shots and the beheading had seen to that.

Oddly, there wasn’t a lot of blood, which was peculiar for a vamp who had drained three young men two nights before, though I wasn’t complaining. But . . . I leaned over and took a sniff. The blood smelled wrong. Though what the blood of a thrice-dead vamp should smell like I didn’t know. I remembered his eyes. The pupils had been wide and black, but the sclera hadn’t been scarlet with blood, but yellowed and sick-looking. Also odd.

I wiped my vamp-killer on the dead guy’s clothes and looked around the gym. The teenagers had been screaming at the top of their lungs when I dashed inside. They had fallen strangely silent when I whacked off the vamp’s head. There was a scent of shock and horror in the air, not surprising since a bloodsucker had walked into high school basketball and cheerleading practice and attacked. I looked around at the floor. Three humans down, counting the teenager Eli was helping to sit. The boy was nursing a badly broken right arm and was sweating and pale with shock, but his throat was intact. Eli checked the pulse of the male adult wearing street clothes, probably a parent. He was out like a light, but the nod Eli gave me assured that he had only fainted. The man in a high school polo shirt was also alive, though bleeding from the nose and mouth, unconscious. Probably a concussion. We’d gotten here before the rogue did more than break the kid’s arm and knock out the assistant coach who tried to intervene.

“You kids okay?” I asked the gymnasium at large.

“You killed him,” a girl in a short skirt and cross-training sport shoes said.


Character Profile: Girrard "Gee" DiMercy
The Misericord or Mercy Blade
The Mercy Blade offers his loyalty to a person or family in return for a service, but as Jane Yellowrock gets to know him, she discovers that there is much more to it.

Claims:
Mother was French, chose his name
Father was Castilian Spanish, raised him and taught him swordplay
Cannot self-heal in this world
Bested Zorro three times in the ring

Reality:
Appears human but is an Anzu – Sumerian storm god, a not-mythical creature who rides the storm clouds. Moves like the love child of a flamenco dancer and a bird of prey. Is like the Obi-Wan of steel blades. Anzus are possibly the oldest living thing on the planet—a few thousand years old. He has much magic and it is bluish – European or Celtic based, which means that iron will break it better than silver. The layers of glamour around him react negatively to steel.

In human form, Gee is slender, fast as lightning, nearly as bright. Is beautiful, exquisite, lovely, with smooth skin - a pale very milky chocolate - and the body of a man who dances a lot, rides horses a lot, works out a lot, and loves a lot. Black hair and changeable blue eyes with an oily shimmer like heat rising off asphalt.

In bird form -- He can alter his form (and version of his form) at will. His natural form is a massive bird with dark blood red wings, dark sapphire feathered beast with crimson breast and wings, though sometimes his wings appear sapphire. Wingspan of 12 feet. His body is maybe 3-4 feet from beak to claws. Weighs no more than 60-70 lbs. Claws like spear points glint at wings and feet. His blood is blue and smells of liquid flowers, perfume like rainbows, but his blood evaporates like alcohol rather than drying and leaving a residue.

**Compiled by Melissa M. Gilbert of Clicking Keys, for the Character History of the Jane Yellowrock world** 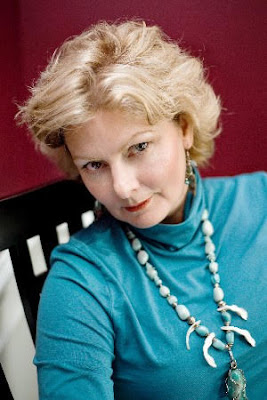 There’s a tour-wide giveaway for copies of COLD REIGN and totes featuring Beast! Open to US residents only.